Home and Garden Expo 2014, benefitting RFL of SL, opens on September 16, and runs through the 28th. Spread over nine sims, HGE features the finest in Second Life Home and Garden design product and creator tools. Over 85 participating creators have joined HGE, one of the first mega-events of the 2015 Relay For Life fundraising drive in Second Life.

Relay For Life of Second Life is in its tenth season, as Second Life residents across the grid band together to raise funds for Relay For Life and the American Cancer Society. The funds raised go to finance cancer research. During the 2014 season, RFL of SL broke the $415,000.00 USD mark for total funds raised.

This year’s HGE is supported by nine Platinum Sponsors and eight Gold Sponsors. This year’s event also includes, for the first time, a comprehensive shopping guide listing all donation items, new releases, hunt, raffle and gatcha items. New rules and a new layout for HGE reduces lag and provides ample display space for each of the participants’ products.

Here is a teaser of some of the items soon available at the Home & Garden Expo. You can get everything you see there! 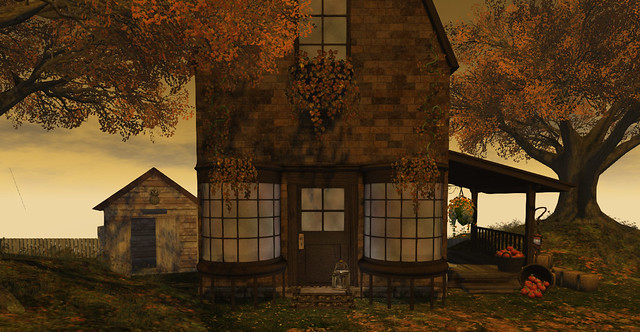 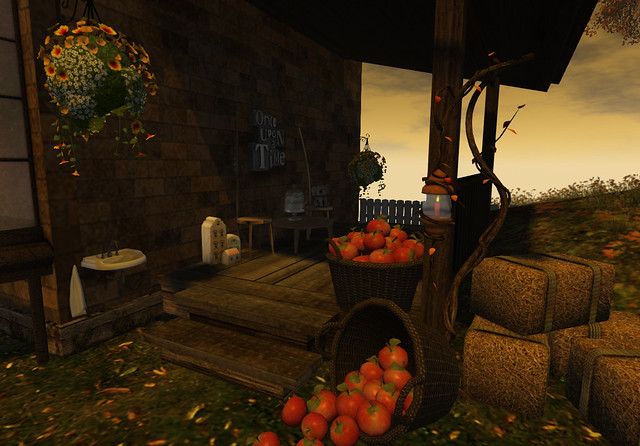 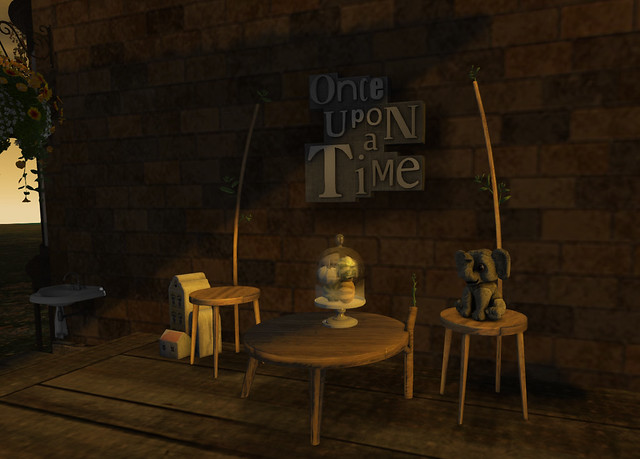 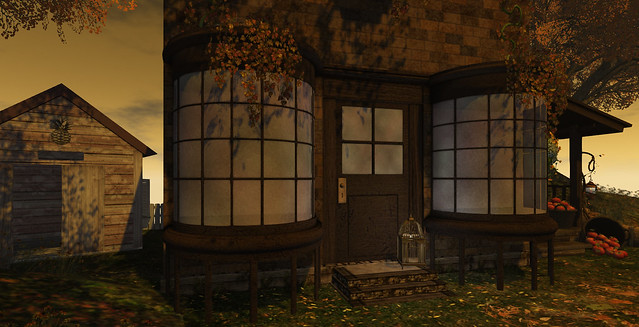 When mesh first came out, I was over the moon at how highly detailed and yet low prim/L.I. furniture became. It got to the point (and still is) where 95% of the things I buy in SL now are home and garden items. Gone are the shopping sprees on hair and clothing (although it does happen occasionally), hello to the wild abandon shopping for home items.

One thing in the home department though that I was still not SO sold on in being mesh were homes themselves. I like to personalize my home with different wall textures and not be stuck with what style the creator chose for me. However, that doesn’t work so well with mesh homes. The textures tend to be baked with shadows, while adding realism to the home, it makes it impossible to mod even IF the home was mod to begin with. The first mesh home that I felt I could mod somewhat was the one in my last home post: The Old Cottage from Domineaux Effect. I was able to select the faces of the walls and tint them without destroying the feel of the whole house. I figured that this is what I would have to do with mesh homes from now on and just live with it, unless you were like The DragonFly Cottage from Culprit where they included the baked textures for you to create your own textures.

Then one day, as I was browsing through plurk, I stumbled upon Barnesworth Anubis’ teaser of his upcoming home for C88. It is very rare to find a relatively modest sized home with 2+ bedrooms. I knew I had to have it. Along comes midnight of the 8th, and I’m doing my best to tp to Collabor88. Eventually after several tries I arrive and I head right inside to start the slow process of rezzing. Once I collect all the loot from this Mid-Summer Night’s Dream C88, I had head to look over my prizes. The very first item I unpack is the [ba] lakeside cottage. I oooo and aaaah, seeing such a spacious home with so few prims. I log off as it is already 4AM, and I am tired.

The next morning as soon as I log into SL, I decide to play around a bit with the Lakeside Cottage to see how it would take me playing around with the wall textures. I randomly start selecting faces of walls and throwing on textures. Wait a minute. I’m able to mod the walls AND add textures and not destroy anything! Some tweaking on getting the textures to line up (if you have shading or designs on it) is involved, but this is like being back with normal prim/sculpty homes! Needless to say, I am incredibly happy with this purchase and look forward to seeing what people come up with as they play with this home and make it truly their own.

I recently discovered the work of Quark Fallen and instantly fell in love. There’s a romanticism to his work that suits my tastes perfectly. As you explore his art, you become enamoured with the beauty of the world as he sees it through his eyes. Be sure to also join his group, as he is very generous and loves to send out lil pressies to his group members as well.

I’ll let his work speak for itself.

Chateau– a place for lovers, where you are able to rent time there and spend quality time with the person you love. (was 50L for 30 min)

Erdbeeren An enchanted place to share with friends and animals. (be sure to check all the food, as most of it is available for sale for FREE!)

Thank you Quark for showing your magical world with us!

One of the greatest things about Fantasy Faire is seeing all the amazing environs created to help our enjoyment of a truly wonderful event! I did my best on taking a shot of each sim that I felt best represented the overall feel of the sim. Fantasy Faire opens at noon on April 20th.

The Garden opens tomorrow, the 15th, with many beautiful items to create the perfect English garden setting. One thing I’m loving about The Liaison Collaborative is the fact that every other month the focus is on home and garden creators. I have always been a huge fan of home and garden items, but it’s only been the past year since the introduction of mesh, that it (home and garden designs) have really taken off, and become sought after. Now you are able to live on your 512 plot and have it impeccably decorated without compromising quality for low prim counts. Happy decorating!

Everything featured in this post comes from The Garden.

I am a diehard Insufferable Dastard eye fan. It’s the only eye brand I wear pretty much 99% of the time, however with Ikon’s new Ardent eyes release I just might be a convert. Introduced at The Liason Collaborative Boutique, I kept seeing people raving about them on plurk so had to try them out for myself. The colors are vibrant, clear, and have a good deal of realism to them which I love in an eye. My only tiny tiny tiny request, is that there be an XXS offered. While there are 5 sizes available… I find the XS still slightly too large of an iris for me, but that doesn’t detract from the beauty whatsoever of these eyes. Try them out for yourself before the boutique closes!

Along with these participating stores:

A special thank you to Felicity Blumenthal for making the amazing ad!

Gala’s latest skin, Stormy, will be released this weekend!

I came across this shop while wandering and I must say I was blown away. The attention to detail and build is incredible. Seriously, if you are looking for realistic and unique buildings/furniture, come check this place out. I’ll let the pics speak for themselves. Absolutely no editing was done, other than cropping. There’s tons more to see as well, my pics don’t do it justice.

END_OF_DOCUMENT_TOKEN_TO_BE_REPLACED

I have been obsessed with skins since day 1 of SL. At times it is hard to believe that I’ve already been in SL now, for almost 4 years. Over that time I’ve witnessed the evolution of many creators. One of those creators is Gala Phoenix. I purchased my very first Gala skin in Dec of ’07, and since then have been an avid Gala fan. It was my very first freckle skin that I felt had realistic freckles. She was having a sale at the time, and with money being tight for me, I was able to get away with purchasing 2 of her skins. I loved the softness the body had to it, and of course which to this day, in my opinion, the fantastic cleavage that Gala is known for.

3 months go by and I go to my very first skin fair. Lo and behold……Gala had come out with a new line of skins. I immediately fell in love. For some odd reason, I only purchased a couple while at the fair, and regretted not having purchased more. As it turns out, I was glad I had made those purchases because it was several months before Gala released the full line at her shop. People were berating themselves for not having gotten them at the fair, while I happily clung to my purchases. When Gala finally released her line, I went to purchase the whole line. At the time she didn’t do fatpacks, so I contacted her and begged her to do a fatpack for me. Luckily for me, she was super sweet and did a custom one for me on the spot. As she continued to release new makeups, I would contact Gala and ask for more fatpacks until I think she got tired of me (and I’m sure others) asking for them, and decided to offer them in her store.

After the initial flurry of the new line, it goes quiet. For months nothing was heard from Gala, and many of us wondered if she gave up creating. Finally, about a year later, Gala releases another new line with 3 new faces. Hyper-realistic, beloved cleavage; it was a match made in heaven. I snatched up the fatpacks as soon as I could click “teleport”. It turns out I wasn’t alone in my adoration of her new line. Gala has become one of the most recognizable skins on the grid. As soon as there was a Gala release, people would teleport in hordes to get it. I’m proud to say that I’ve been able to see Gala emerge as the talented creator she is today. I look forward and wonder where she will take us next!